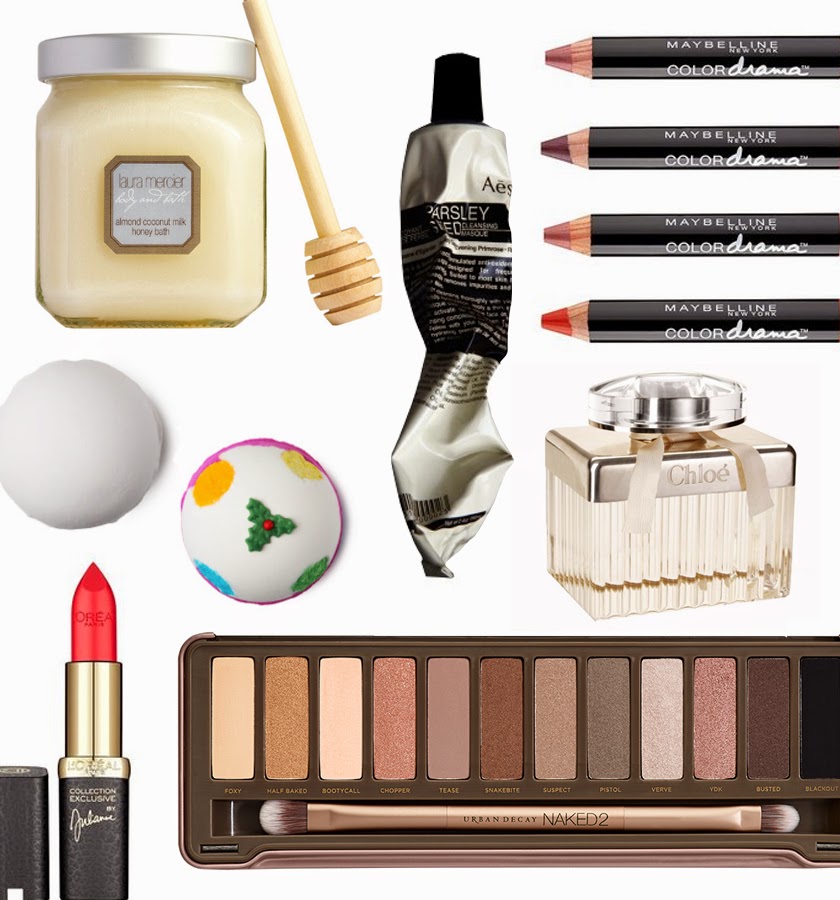 I turn twenty five on the 31st October (halloween baby), and I’m rather nervous about it. I’m in the middle of a somewhat ‘quarter life crisis’ but I’m not going to babble on about it, instead I thought I’d share with you my beauty wishlist. I don’t expect to be given all of these items, they are just ideas for my boyfriend and family. Also, if I’m feeling spendy during the next few months, then I’ll also pick up some of these. In fact, I’ve already treated myself to three of the Maybelline Colour Drama lip pencils this morning, I got Nude Perfection, Minimalist and Berry Much. They are currently on 3 for 2 at Boots, so I thought why the heck not! And yes, a review of those will be coming soon!
Any who, lets begin.So, as some of you may know, I love baths. And I’ve been eyeing up this luxurious bubble bath by Laura Mercier. It has been made with coconut milk, almonds and honey and it comes with this cute bath stirrer. This retails at £32 which is very expensive for a bubble bath, but I thought that would be a really nice birthday present. And, Tanya Burr uses the Creme Brulee one so they must be good!
Moving on to a face-mask, who doesn’t love a good face-mask aye? I’ve had my eye on the Aesop Parsley Seed Mask, which is £27 a pop. I’ve never actually tried Aesop the brand, but Essie Button recommended this a while back and I am yet to try it!

And then we have the Maybelline Colour Drama lip pencils, these are £4.99 each, and are a much cheaper alternative to the Nars Velvet matte lip pencils. And, as I mentioned earlier I picked up three shades. I would still very much like to get Fab Orange to complete my collection!

Moving on to Lush’s bath bombs. I’ve chosen So White (£3.50) and Luxury Lush Pud (£3.50), however I do want the entire Halloween and Christmas range. I have a feeling when my birthday comes, I’m going to be spending a fortune in Lush. So, do expect a massive haul in the near future.
Now, I’ve ran out of perfume (dun dun dun), and I want to try something new. It was a debate between the Marc Jacobs Daisy Dream perfume and the Chloe perfume. I did have a whiff of the Chloe one in Boots recently, and it’s not something I’d usually go for. It’s very girly and has a fruity, floral scent to it, but I quite like it. It’s definitely a contrast to my all time favourite, Lady Million. But, the price is pretty steep (£62-75), so I keep putting off purchasing one.
We have another lip product, what can I say, I’m a huge lipstick addict! This is one of L’oreal’s latest launches – the Colour Riche Pure Reds Collection (£6.99). I’ve chosen Julianne’s red lippy, as I feel that matches my skin-tone and hair colour best. However, I am also intrigued by Blake’s red lipstick, unsure if it would suit me though. Unfortunately the majority have sold out super quickly, so I will be keeping my eye out in Superdrug and Boots for when they re-stock them.
And last but not least, the Urban Decay Naked 2 Palette (£37). I’m not really an eye shadow kind of gal, I’m more into my dark winged liner. But I’m thinking of switching things up as I’m getting older. I’m not saying I’m abandoning the winged eye-liner for good, I just want to experiment with my eyes a bit more!
And that’s everything I’m currently wishing for which is beauty related. There will be a few more wishlist’s to come later on in the week. Keep your eyes peeled for my current fashion cravings and other bits and bobs!