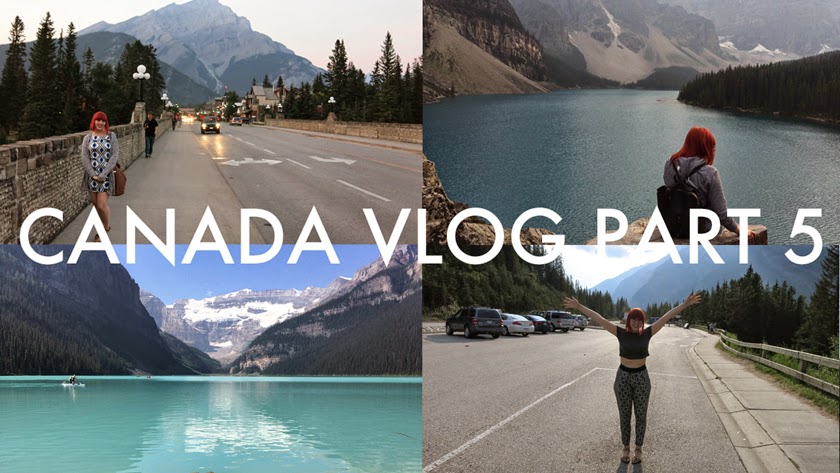 Exciting news, Canada Vlog Part 5 went up yesterday evening! I really didn’t think I was going to get the chance to edit and upload it for it to go up on Sunday but I pulled through and managed to get it done!

The reason why I didn’t think I had enough time to edit it, was due to life being incredibly busy at the moment, with work – Monday to Friday, and then a full on day out in London on the Saturday. Which I did vlog – my first UK vlog, hooray. It will all be revealed later on in the month… But anyway, back to my Canadian vlog.

In this part, we continued our road trip – Kelowna to Banff, a painful six hour drive and a lot of junk food consumed along the way.

We arrived in Banff, and stayed at a lovely hotel called The Banff Boutique Inn – a cutesy wooden apartment. We were fortunate enough to be right in the centre of Banff, surrounded by many interesting restaurants, candy stores and gift shops.

The following day we drove an hour to check out the near by lakes: Lake Louise and Moraine Lake. This was mine and Joe’s favourite day of the whole trip. Everything was so tranquil, beautiful and the views were breathtaking.

Any who, I need to get on with the daily house chores and what not. Life kind of sucks when you’re an adult and have responsibilities. But, I hope you enjoyed part 5 guys!
The next one may be up on Wednesday depending if I get enough time. If it’s not up on Wednesday, it will definitely be up on Sunday.