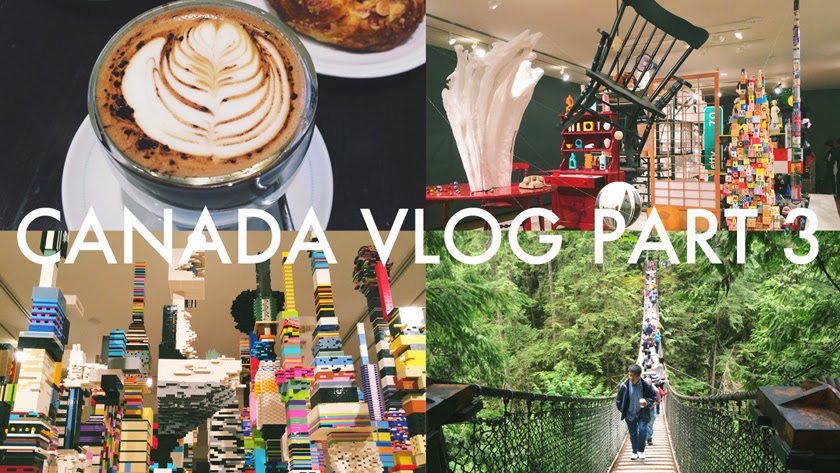 The other day I uploaded part three of my Canada Vlog series. This has to be one of my favourites so far. I really enjoyed editing it and I just remember having a really fun jam-packed day.To start off the vlog, I had a lovely little breakfast with Joe at Belcafe – the mocha I had was incredible, possibly one of the best mocha’s I’ve had, it was so creamy, nutty and all kinds of deliciousness. To go alongside my heavenly drink, I had a sweet pastry, which was also very nice.

Afterwards, I headed to the Vancouver Art Gallery to check out Douglas Coupland’s exhibition. It was full of colour and different to what I was expecting – in a good way though.  Coupland has a very interesting take on the early 21st Century and I very much enjoyed his ‘Slogans for the Early Twenty-First Century’. It made me chuckle knowing that everything he stated was so true, yet we are blinded by it all because we are addicted to the internet.

After the exhibition, I took the sea bus and headed to North Vancouver. I got the opportunity to venture round Lynn Canyon Park, walk across the suspension bridge and experience my first ‘hike’. To be honest, it was really refreshing to see some greenery and actually feel like I’m in Canada, rather then being in a city!After trekking around for a few hours, I decided to head back as I had a bunch of other things I needed to get before Joe was due to get back from his conference.
When Joe returned, he showed off his snazzy walking tea-pot, which was actually designed by Pixar’s RENDERMAN! So friggin’ cool.
Anyway, hope you guys enjoyed part three. And stay tuned for part four, which should be up tomorrow!